Welcome to the Hunts Point Slave Burial Ground Project.  Throughout this website you will find information about the history of Hunts Point, the slave burial ground as well as what it looks like today.  You will also learn what P.S. 48x is doing to partner with the community and teach the students about the history that surrounds them.  We hope that you enjoy reading these historical documents, perusing the photographs, as well as the teacher created lesson plans to aid in teaching you and or your students about this rich history.  Visit the HSPBG site yourself.

Re-Discover the Site Yourself!

Five years after funds were allocated, the money has still not been directed towards a permanent memorial and preservation of the park where many enslaved rest without recognition.  Follow the coverage in the Hunts Point Express and on News 12- The Bronx.

Where do we go from here?  Please contact local, state, and national officials, and connect with us.

5 Boros to Freedom looks to celebrate the themes of self-reliance, supporting others, self-assertion, and community through a variety of program offerings in each of the five boroughs on June 5-16, 2019, including at the Hunts Point Slave Burial Ground.

For more information and to register for the Remember the Forgotten- A Walking Tour of the Hunts Point Slave Burial Ground, please RSVP using the registration form.

The performance represents many years of research into the Arara music of Cuba, tracing its roots to the religion and culture of Dahomey, in present day Benin, and telling the story of Florentina, an important Arara figure in Cuba and the Cuban slave rebellions. See the Don't Change My Name Flyer for more information or visit the Bronx Arts Ensemble website.

2019: The Ongoing Effort for Recognition is Featured on ABC

February 2019
BRONX, New York (WABC) -- A black and white photograph taken at the turn of the 20th century still reverberates today in the Bronx.

On the front, rough-hewn gravestones in a patch of grass; on the back, simple text written in cursive: "Slave burying ground Hunts Point Road." ​ Learn more about current efforts underway to write the forgotten back into our city's story.

During Spring 2019, Adam Arenson, Manhattan College Associate Professor of History and Director of the Urban Studies Program, leads a college course "to learn more about the history of slavery in the Bronx, and to see what this history means for the current residents of these neighborhoods, and for those whose families have roots here. We want to use our research skills as historians to help people learn more about their history and their connections. And we plan to consider what kind of memorial is right for this legacy of slavery, and the enslaved people buried in unmarked graves, in the Bronx and elsewhere."

Since inception, the Hunts Point Slave Burial Ground Project has been a multi-year journey to 'write the forgotten back into history' and engage Hunts Point youth in learning about the history of their neighborhood, their city, and use that lens to take control of current issues and lead to new improved outcomes in the future.  Nearly $180,000 in funding has been secured for a permanent memorial.  Now it's time to complete the project after all these years.  Our motto is to 'Transform Learning About History to Doing Something About History.' ​

Bronx Ink Coverage on the 'Inequity in the Greenest Borough'

"When an elementary school class discovered a slave burial ground at a public park in Hunts Point, the Parks Department gave it official recognition in 2014. But plans for a memorial have since stalled at the local level."

In a January 2018 follow up on the progress of many Works in Progress, New York Times' journalist Helene Stapinski updates us all on the progress surrounding many amazing projects, including the Hunts Point Slave Burial Ground.

In November 2017, The New York Times' Helene Stapinski covered the current progress of the Hunts Point Slave Burial Ground (HPSBG) Project in her column, Works in Progress, where she writes about the ongoing advocacy for developing a community-designed permanent memorial and educational outreach to remember those once forgotten in Hunts Point. 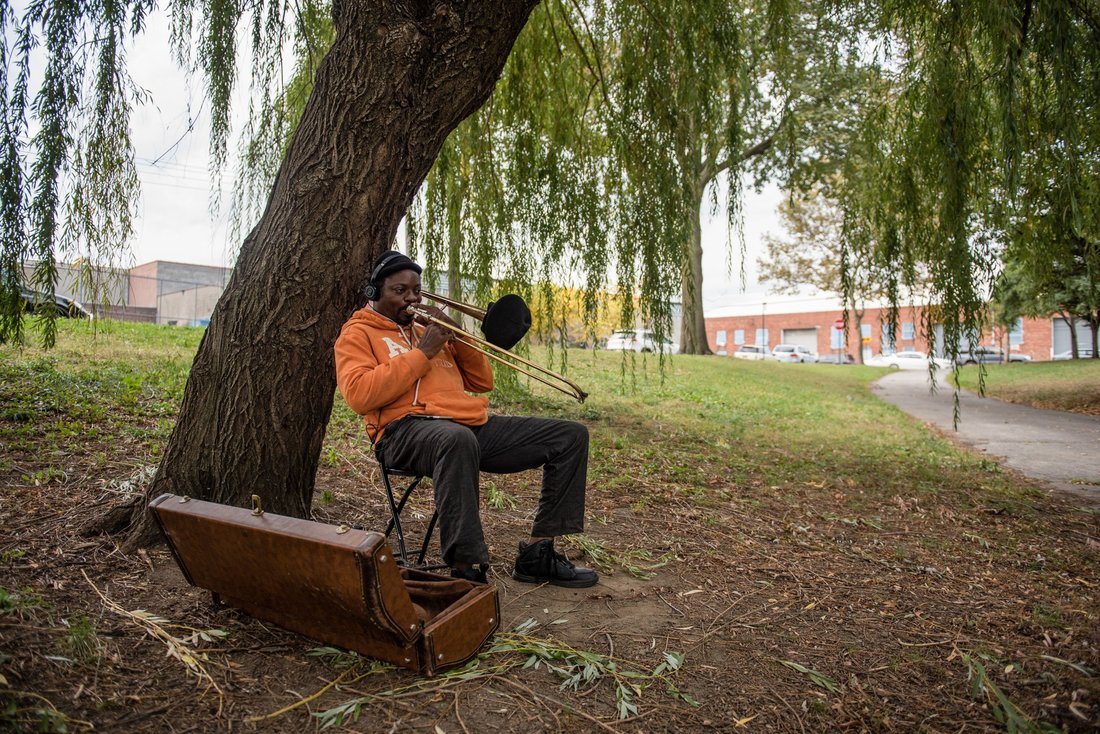 "The historical photographic and documentary evidence supports the existence of a slave burial ground historically located on the south side of Old Hunts Point Road across from the family burial ground of the Hunt, Leggett, and Willett families known today as Drake Cemetery."  Read the entire archaeology report from the New York City Landmark Preservation Commission on the HPSBG site﻿.  Then, join the community Facebook discussion on where do we go from here?

In Spring 2017, students became archaeologists!  During the South Bronx English Intensive Sessions after school program sponsored by PS 48, developed analytical skills and career-readiness, alongside literacy, science, and mathematics understandings as they researched historical artifacts from archaeological digs in New York City.  These skills contextually prepare the students for critically investigating the Hunts Point Slave Burial Ground Project during May and June.  The student research culminated in a student-led Drake Park Needs Assessment, where students designed improvements for Drake Park, site of The HPSBG.

The Hunts Point Slave Burial Ground (HPSBG) Project seeks to definitively locate and commemorate the lives of slaves that lived in Hunts Point, Bronx, New York. Though the graves may have been obliterated their lives shall be remembered. The project works with students from PS 48, a New York City public school, alongside local historians, community organizations, museums, and city agencies to investigate the final resting place of the slaves from various historical and prominent New York families.  View the HPSBG Project Trailer.

"Few neighborhoods in the Bronx have so many historical connotations as Hunts Point"
John McNamara, April 1, 1971 McNamara's Old Bronx

It is well known in the historical reference that the New York City area's wealthy landowners had slaves, yes, even here locally in the Bronx. Alongside the well to do landowners that are buried in Hunts Point in the Hunt family cemetery was the family slave burial cemetery. In here lies the mystery: where is that cemetery? Local students saved the Hunt family cemetery (now a city park) from obliteration in the 1960s yet the slave burial grounds were leveled and lost to history much earlier.

The clues leading us back to those hallowed grounds revolve around an circa 1910 photo from the MCNY collections and a clue that the slave burial grounds was located "across the street" from the family cemetery. The MCNY photo (ca 1910) has documented the slave burial ground's very existence and geographic location. In concert with various other source materials, today, NYC public school students and their teachers located in the Bronx, alongside local historians, are seeking to uncover the mystery and commemorate the forgotten lives and last resting spots of these individuals. They rest here, somewhere nearby, unknown and unrecognized. They now deserve to now be written back into our history.

THE HPSBG Project and the Periwinkle Initiative