5 Boros to Freedom looks to celebrate the themes of self-reliance, supporting others, self-assertion, and community through a variety of program offerings in each of the five boroughs on June 5-16, 2019, including at the Hunts Point Slave Burial Ground.

For more information and to register for the Remember the Forgotten- A Walking Tour of the Hunts Point Slave Burial Ground, please RSVP using the registration form.

Come and engage with the student researchers from Manhattan College who have spent the 2019 spring semester researching slavery in the Bronx, including at the Hunts Point Slave Burial Ground.  They will share what they have learned and answer questions.

During Spring 2019, Adam Arenson, Manhattan College Associate Professor of History and Director of the Urban Studies Program, leads a college course "to learn more about the history of slavery in the Bronx, and to see what this history means for the current residents of these neighborhoods, and for those whose families have roots here. We want to use our research skills as historians to help people learn more about their history and their connections. And we plan to consider what kind of memorial is right for this legacy of slavery, and the enslaved people buried in unmarked graves, in the Bronx and elsewhere."

Bronx Ink Coverage on the 'Inequity in the Greenest Borough'

"When an elementary school class discovered a slave burial ground at a public park in Hunts Point, the Parks Department gave it official recognition in 2014. But plans for a memorial have since stalled at the local level."

During Summer 2018, the educational work of the HSPBG project extended to young adults through a collaboration with The Point CDC, which has been a steadfast supporter of the HSPBG project.  A.C.T.I.O.N. youth were given the tools to become community organizers, learning methods for collecting survey data to then digitally design and map out proposals for permanent memorials in Drake Park.  A.C.T.I.O.N. youth focused on leading the community towards determining, advocating and designing a permanent memorial and general improvement of local parklands, particularly Joseph Rodman Drake Park. 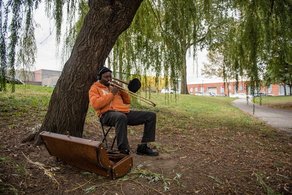 In November 2017, The New York Times' Helene Stapinski covered the current progress of the Hunts Point Slave Burial Ground (HPSBG) Project in her column, Works in Progress, where she writes about the ongoing advocacy for developing a community-designed permanent memorial and educational outreach to remember those once forgotten in Hunts Point.

"The historical photographic and documentary evidence supports the existence of a slave burial ground historically located on the south side of Old Hunts Point Road across from the family burial ground of the Hunt, Leggett, and Willett families known today as Drake Cemetery."  Read the entire archaeology report from the New York City Landmark Preservation Commission or read it d﻿irectly here on the HPSBG site﻿.  Then, join the community Facebook discussion on where do we go from here?  The final report validates the work of the student archeologists and builds upon their cemetery headstone census work.

Listen as Phil Panaritis discusses the mission of the HPSBG on the radio and online with WBAI's Trump Watch with Paul DeRienzo. Download a copy for ﻿offline listening even﻿!  Or download on iTunes.

On May 23, 2017, members of the PS 48 HPSBG educators team met with the office of State Sen. Jeffrey D. Klein, a long term partner for the HPSBG, to discuss future collaboration opportunities.

'BEYONd THE HALL' Symposium at Bronx Community College

Phil Panaritis presented at the Beyond the Hall: A Day of Conversation about Commemoration, Historic Preservation, & the Study of History Symposium at Bronx Community College on May 12, 2017.  He was on the panel telling the story of Bronx Histories with Angel Hernandez, Director of Programs and External Relations, The Bronx County Historical Society and Elena Martinez, Co-Artistic Director, Bronx Music Heritage Center.

HANDS on Archaeology for the Students

In Spring 2017, students become archaeologists!  During the South Bronx English Intensive Sessions after school program sponsored by PS 48, developed analytical skills and career-readiness, alongside literacy, science, and mathematics understandings as they researched historical artifacts from archaeological digs in New York City.  These skills contextually prepare the students for critically investigating the Hunts Point Slave Burial Ground Project during May and June.

The HPSBG Project at PS 48 hosted a meeting, alongside the offices of New York State Senator Jeffrey D. Klein and the New York City Department of Parks and Recreation Bronx Borough Commissioner Iris Rodriguez-Rosa, with members of the community to begin the process of developing plans for a permanent memorial.  A presentation of the official findings of the Hunts Point Burial Ground Plan 1A Documentary Study and Ground Penetrating Radar Survey, funded by the Office of Sen. Klein, corroborated and confirmed the research conducted by the HPSBG student-historians.

THE HPSBG Project and the Periwinkle Initiative

In December 2016, the Hunts Point Slave Burial Ground Project was included in the Memory and Landmarks: Reports of the Burial Database Project of Enslaved Americans.  The burial database has been developed through the efforts of the Periwinkle Initiative, which is "a public humanities and education initiative dedicated to preserving cultural heritage associated with enslaved Americans.  The Initiative’s core project is the National Burial Database of Enslaved Americans – which will be the first and only national repository to document individual burials and burial grounds of enslaved Americans."  The work of the HPSBG has been recognized in the Periwinkle Initiative's Spotlight on Local Work.  ​Allison Meier writes about the database and HPSBG's inclusion over at Hyperallergic.

On June 15, 2015, Phil Panaritis and Justin Czarka spoke at a meeting of the Metropolitan Chapter of the New York State Archaeological Association, at Columbia University, to highlight the current progress of the project, and provide guidance on the project going forward.  The event brought together HPSBG with archaeologists to view and consult on documents related to the project.  The event was organized by Nan Rothschild, Director of Admissions for the Museum Studies Program at Columbia University.

Phil Panaritis and Brian Carlin recently presented at the 2015 National Council for History Education (NCHE) national conference.  They presented the story of the Hunts Point Slave Burial Ground (HPSBG) Project as an exemplar for utilizing social justice and advocacy in education for curriculum design.  View the resources prepared for the national conference on the HPSBG NCHE Page.

Come out on Saturday, October 18, 2014, to Drake Park for It's My Park Day!  Get involved in stewardship activities with NYC Parks like raking, mulching, and planting.  Transform the park into a natural respite from the hustle and bustle while improving the site of the Hunts Point Slave Burial Ground.  Continue the hard efforts of the students of PS 48, who collaborated yet again with NYC Parks and New Yorkers for Parks, to plant daffodil bulbs in remembrance of September 11 and HPSBG.

Join the discussion to determine how to best remember the Hunts Point Slave Burial Ground.  Come out on Thursday, September 25, 2014, at 6 p.m. at the Hunts Point Rec Center, located at 765 Manida Street (click for location).  Post the Community Board Meeting Flyer, invite others, and have your voice heard by our community's elected officials.

ABC's Here and Now showcases the work of the Hunts Point Slave Burial Ground Project.  The segment, airing on February 15, 2015, includes an interview with Phil Panaritis, project co-founder, that details the modern process to uncover the lost history of New York City.  The segment highlights the work of students, historians, educators, and community organizers to remember the lives long forgotten.
2014 NYC Department of Education Principals Conference
On July 8, 2014, the HPSBG Team of Principal Roxanne Cardona, alongside educators Ms. Grace Binuya and Mr. Justin Czarka, present strategies to elementary school principals for implementing local history projects in their schools.  The session titled Authentic Historical Investigations: The Hunts Point Slave Burial Ground Project provides an opportunity to "Learn how an old photograph and curiosity inspired a school’s multi-year investigation into a forgotten slave burial ground in the Bronx. After two years of intensive research by PS 48 students and educators, the Hunts Point Slave Burial Ground (HPSBG) Project team located the site of an obliterated cemetery for dozens of enslaved Africans who worked the large agricultural estates on the Hunts Point peninsula from 1664 to 1827, when slavery ended in NY State. In the course of their investigation, the PS 48 and Bronx TAH Grants team partnered with local historians and institutions to locate dozens of pertinent primary and secondary source documents including: wills, census records, newspaper articles, maps, books and photos. Learn about this amazing journey and strategies to make history come alive."

Parkchester NAACP Chapter Honors Student Historians
On June 25, 2014 Ms. Beverly Roberts of the Parkchester Chapter of the NAACP visited the students of PS 48. She provided Certificates of Recognition for their efforts in discovering and remembering the final resting place of the enslaved Africans in Hunts Point.  View the NAACP Ceremony images.

HPSBG Funding Press Conference-  May 9, 2014
On Friday, May 9, 2014, at 11:00 a.m. the Office of New York State Senator Jeffrey D. Klein hosted a press conference regarding fun﻿ding﻿ allocations awarded for the Hunts Point Slave Burial Ground (HPSBG) Project.  Held at Drake Park, the press ﻿conferenc﻿e announced capital funds for the development of a permanent memorial to those whose final resting place was once﻿ obliterated.  Today, the community of Hunts Point led by the students of PS 48 returns the forgotten to our shared history.

New Yorkers for Parks (NY4P) Annual Daffodil Breakfast- April 17, 2014
On April 17, 2014, the Hunts Point Slave Burial Ground was represented by Ms. Grace Binuya and Ms. Anitra Lauro at the annual daffodil breakfast hosted by New Yorkers for Parks.  NY4P honored HPSBG and the students of PS 48 for their commitment to remembering the past through the development of a living memorial commemorating September 11 and beautifying Drake Park, site of the slave burial ground.  See more information about this event here.

New York History Blog Post on 'The Bronx State of History'
Peter Feinman writes in the blog, which posts on historical news and viewpoints in New York State, in part, "students at Public School 48 appear to have uncovered an African slave burial ground in Joseph Rodman Drake Park. The school has asked the New York State Office of Parks, Recreation and Historic Preservation to officially recognize the park. This work was spearheaded by Philip Panaritis of the NYC Education Department who was involved in the Teaching American History program. He is a strong advocate of bringing local history, specifically The Bronx, into the school curriculum."  View the entire blog at the New York History Blog.

HPSBG Election Day Educator Professional Development Day, November 5, 2013
Learn the HPSBG Project story, how to implement HPSBG resources and lessons in your classroom, and take a gallery walk of critical images related to the project.  View the agenda here.

HPSBG Community Meeting, October 21, 2013
P.S. 48, the Office of Congressman Jose Serrano, and Bronx TAH, hosted a community forum where school administration and teachers shared the educational mission of the project with members of the community.  The community meeting brought together interested stakeholders to discuss the educational progress of the project, as well as lay the groundwork for further advocacy to be conducted by community groups.